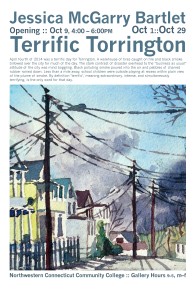 April fourth of 2014 was a terrific day for Torrington. A warehouse of tires caught fire and black smoke billowed over the city for much of the day. The stark contrast of disaster overhead to the “business as usual” attitude of the city was mind boggling. Black polluting smoke poured into the air and pebbles of charred rubber rained down. Less than a mile away, school children were outside playing at recess within plain view of the plume of smoke. By definition “terrific”, meaning extraordinary, intense, and simultaneously terrifying, is the only word for that day.