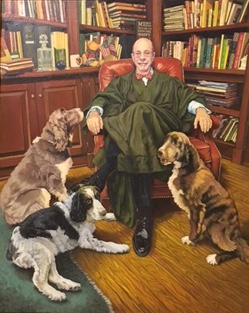 Dedication of Doretta Miller’s Portrait of Judge Evan J. Wallach held at the US Court of International Trade in NYC.

On November 10, Doretta Miller’s portrait of The Honorable Judge Evan J. Wallach, commissioned by the US Court of International Trade, was dedicated and a reception with the artist was held at the Courthouse at One Federal Plaza in New York City, where the painting will be permanently installed. Judge Wallach served on the Court for 16 years, until his appointment by President Barack Obama to the Federal Appellate Court in Washington D.C. in 2011.