Where Do I Come From? Where Am I Going? 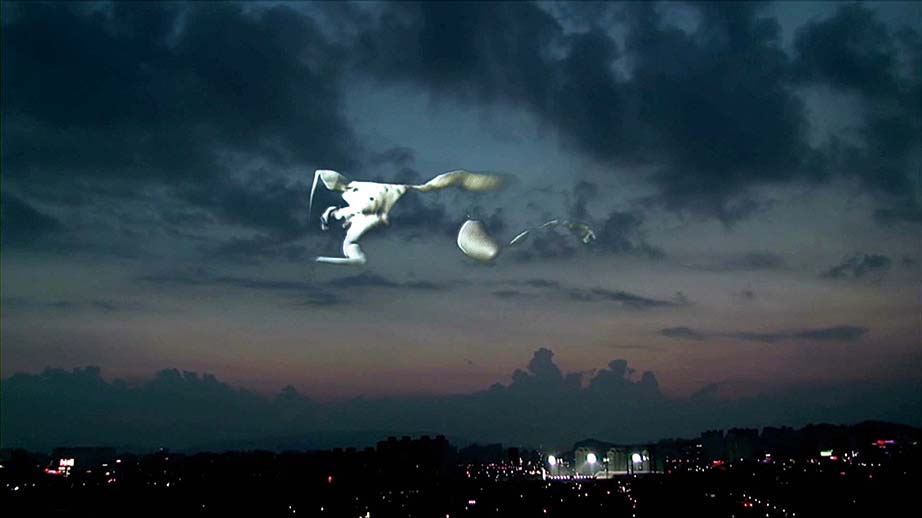 “Where Do I Come From? Where Am I Going?” is a collection of video installations that reflect the artist’s autobiographical memories of wandering around the world, pursuing his artistic career for thirty five years. The installations are divided into three parts from the entrance to the inner wall of the exhibition hall. In each space, a streetlamp with a signpost is standing. The first space is the entrance of the exhibition hall. A video is projected on the wall that symbolizes the door into the destiny of humanity. When a door is opened, a large field appears and winter, spring, summer, and fall scenes appear in rotation. This space symbolizes the sight seen when a life first encounters the world. The second space shows immigration trunks of various sizes scattered open. Books, letters and other items are shown inside some of the open trunks. Amid the sundries inside, a video is projected on the box, showing the senders of the box talking about their hopeful future. The box was left in the storage at the border and never reached the addressee. In the third space, numerous clocks of various sizes are installed on the walls and the floor of the space. The clocks are ticking and emitting LED lights in the darkness. They indicate different times around the world. A video is projected onto one clock that measures two meters square. The stories of miserable and successful immigrant families are contrasted, and the artist’s portrait appears at the end of the video, asking, “Where Do I Come From? Where Am I Going?”

Yongshin Cho is a media artist. He has been awarded an MFA in plastic arts from Université Paris-VIII and has been based in Seoul, Paris and then New York. He has been showing his works around the world including in Korea, China, Japan, France, Germany, Spain, the United Kingdom and the United States. His works have been shown at many art fairs, museums and galleries, including Gentilly International Video Festival (France), International Video & Technology Art Festival (France), Gwangju Biennal (Korea), ARCO International Art Fair (Spain), FIAC Art Fair (France), Doryun Contemporary Museum of Art (China), Gwangju International Media Art Festival (Korea), Klapper Hall Gallery, Queens College (US). His work Reflexion is included in FNAC collection (France).