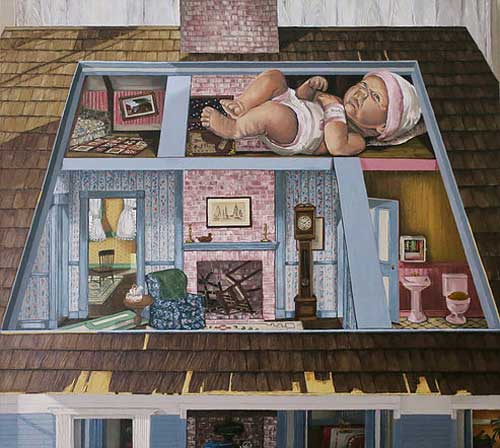 FIRST STREET GALLERY is pleased to announce a solo exhibition of recent work by Tracy Collamore. Entitled A Doll’s House, the exhibition will run from September 5–30, 2017, with an opening reception for the artist on Thursday, September 7 from 6 to 8 pm.

In her previous exhibitions, Tracy Collamore has shown highly colored, brightly lit paintings of suburban life that leave a darker after-effect upon the viewer, implying the existence of an ominous dimension beyond the physicality of the objects and their settings. In this, her third solo exhibition at First Street Gallery, Collamore concentrates on paintings of a doll’s house that has been residing in her studio over the past two years. Ranging in size from 8 x 10 inches to 3 x 5 feet, the paintings are a series of vignettes, which capture the miniaturized preciousness of the dollhouse, its contents, and its inhabitants.

Collamore draws on the familiarity of the everyday objects she paints and creates an authentic visual reality of the doll’s house that identifies with genre scenes of suburban modernity. And yet, the images provoke the existence of an alternate, psychological reality beyond their immediate impression. By using the visual familiarity of a doll’s house, Collamore exposes the implications of our societal structure, the confinements of domesticity and gender roles, and the iconography of childhood conditioning. These images are subtly terrifying as they gently expose the underbelly of our modern society’s expectations.

Tracy Collamore has a B.A. in Studio Art from Moravian College and an M.F.A. in Painting from Western Connecticut State University, where she studied with resident faculty including Margaret Grimes and Marjorie Portnow, and visiting faculty including Susanna Coffey, Judy Glantzman, and Ruth Miller. Collamore has exhibited her work extensively in solo, invitational, and juried exhibitions regionally and in New York City. She is an Associate Faculty of Art at Post University and serves as President to the Board of Directors at First Street Gallery.