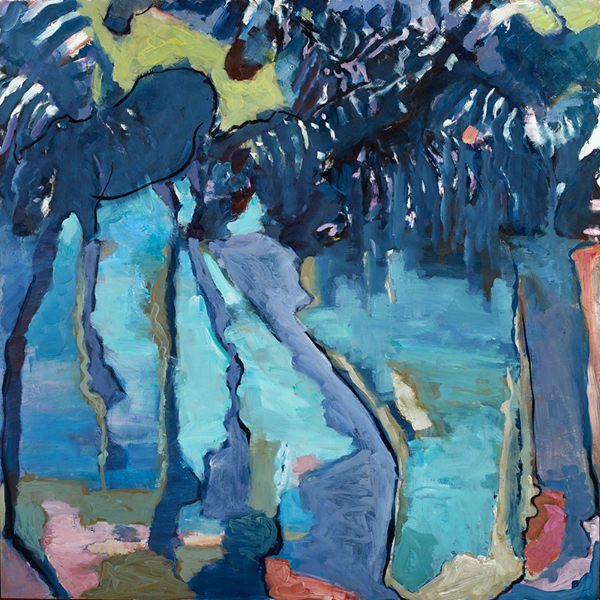 FIRST STREET GALLERY is pleased to present new works by Kathi Packer from March 27 through
April 21, 2018.

In her exhibition titled, Equilibrium, Packer revisits the singular relationship between habitat and wildlife in the context of Africa’s Sub-Sahara migration. Where in earlier works, she had explored uncertain and apocalyptic threats to natural harmony, Packer now paints elegiac tableaux of what should have been cherished and protected, an Eden past.

Packer’s focus is centered on the idea of balance, navigating a taut line between abstraction and representation, one that in a way mirrors, metaphorically, the appearance and disappearance of her chosen subject matter. Hidden in plain sight a herd of zebra blends so that there is no beginning or end. In the high grass, stripes are mistaken for shadow and sunlight. A mass of wildebeest mimics dark blue spheres of rain. At other times, wildlife is subtly revealed; their shapes woven into a web of vegetation, barely distinguishable from their surroundings. She continues to build on her narrative of invented scenarios touching on realism.

In her past works Packer relied on earth tones meant to invoke the challenges of drought. She has replaced that former palette with a richer and more expressive one, dominated by blues, violets, orange-reds and yellow greens.

Without sounding a shrill alarm, Packer appeals to our inherently positive nature that insists on preservation, which by extension, enhances coexistence with all living things.

Kathi Packer has exhibited within the U.S. and abroad. Her work is in private and in permanent collections including The New Britain Museum of American Art, Galeria Nacional de Costa Rica, The University of Connecticut School of Medicine, The Phoenix Corporation and Hartford Hospital. She has received numerous awards for painting as well as fellowship grants from the Connecticut Commission on the Arts and from The Greater Hartford Arts Council. Packer’s work appears in Volume 1 and 36 (2017-2018) of Studio Visit Magazine. For more information: www.kathipacker.com

The West Chelsea Building is closed on Friday, March 30 for the holiday.