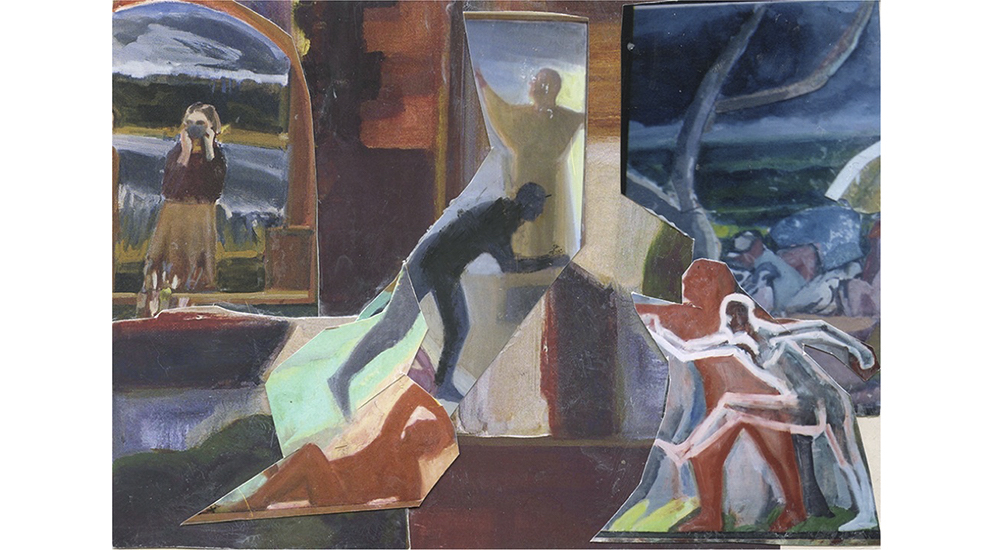 Across The Years, collage – composite of images of paintings, 2016

“Across the Years” is a journey through time exploring the origins and evolution of the leit-motifs of my paintings. Place and voyages have played an important role both in my childhood and later in my art. The Mediterranean with its solid forms and ancient history has allied me with the stillness of metaphysical time. In contrast, the Tropics have illuminated the fluidity of nature with its ever-changing weather patterns.

In later years, these places have become a transportable internal world metamorphosed by the layering of distance. The use of collage has helped me bridge the fixed and the mutable. Images can become restructured, fragmented and condensed into a more porous and spatial context fusing the past and present. Personages can appear as apparitional and emblematic or transform as observers or participants. The canvas thus evolves into a theatrical stage of internalized landscapes and recurrent figures revealing themselves in the choreography of gesture and stance. These works are the result of a palimpsest of years that reflect the inherent tension between self, others and place; a place no longer fixed but open to a spatial arena of memory and time.

Wendy Gittler has a Master’s degree in both Art History and Painting. She has taught at Hunter College, The School of Visual Arts and the New York Studio School amongst other places and has traveled extensively in Europe, the Middle East, Mexico and the Tropics. She has had numerous solo exhibitions and has been in many group shows.