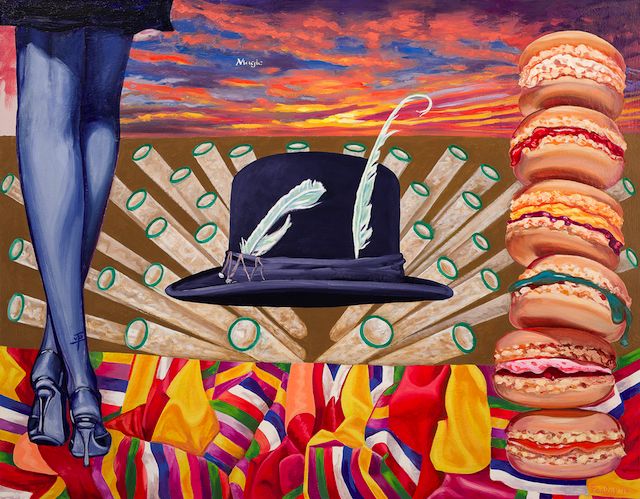 The rabbit hopped on stage, reached into his top hat and
pulled out Magritte’s painting The Explanation ….
and ate it

Hank Feeley returns to First Street Gallery and, once again, waves his magic paintbrush and pulls out of his hat the unexpected, the paradoxical, the enigmatic.

Feeley’s idiosyncratic painted collages are all about color and composition. Those are the mainstays. He draws from all sources. He’s kind of a nut about collecting images. He has boxes and boxes of them. All jumbled up. They are photographs he has taken, sketches he’s made, fragments of old paintings, doodles, clips from newspapers and magazines, pieces of fabric, found objects. Whatever catches his eye. He goes through these images whenever he starts a fresh painting; but, when he sees them again, reshuffled and out of context, he gets new ideas about them. That’s his inspiration. He takes images that weren’t meant to go together and puts them together into a provocative and colorful composition.

“The intensity of his style, combining imagery from popular culture, art history and advertising, with heady color, has something in common with surrealist Max Ernst’s description of his own work in collage: ‘A linking of two realities that by all appearances have nothing to link them, in a setting that by all appearances does not fit them’.“

In other words, Feeley pulls off another nifty painting Hat Trick.